Ephesians, Chains, Paul, and the Temple 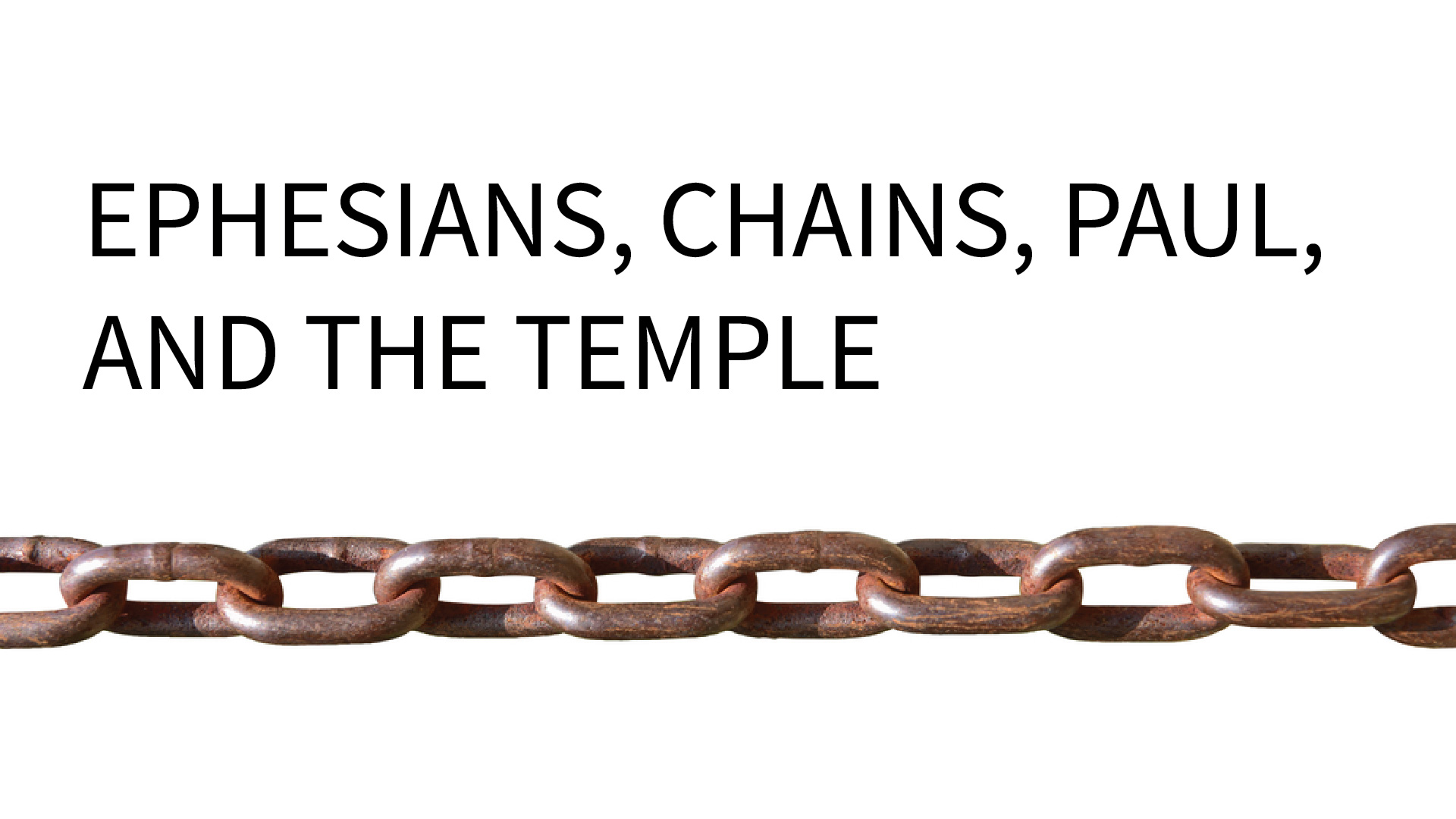 At times, our preaching of Paul’s letters tends to trend, even unintentionally, toward a doctrinal approach and as such lacks the personal drama of Paul’s own situation that I believe is woven throughout the letters.

Last year I was reading, Bo Reike’s Re-examining Paul’s Letters: The History of the Pauline Correspondence. Reike uses the internal evidence of the Pauline letters and Acts to construct, not only the dating of the letters of Paul but also the place of composition. You would have to say that for most people this is a book that should come with the warning, ‘Do not read while operating heavy machinery’ which should be true of any book really, but I found it a fascinating read and one that made me explore other connections between Paul’s life and his letters.

Here is one that I think is fruitful for how we approach the letter we call Ephesians[1].

Reicke places the time of composition of Ephesians at 59 A.D. and the place of composition as Caesarea Maritima, a city of Herod the Great, and the seat of the Roman Procurator of the Province of Judea. Paul was transferred to Caesarea Maritima from Jerusalem (Acts 23:31-33) when a plot to assassinate him was revealed by Paul’s nephew (Acts 23:12) to the Roman Commander in Jerusalem. Paul spent two years under house arrest while successive governors Felix and Festus dillydallied by trying to please the Jewish authorities or waiting for a bribe (Acts 24:26,27 and 25:9). It was while Paul was under house arrest in Caesarea Maritima that he wrote three letters where he describes himself as “in chains” (Eph.6:20; Col. 4:3,18; Phile.10,13).

Paul’s ability to craft his message to the context of his hearers is portrayed in Acts, of particular note was when he was in Athens (Acts 17:16-34). This same ability is on display in his letters, for instance, Philippians, where Paul uses military language to address a Roman colony that was settled by veteran legionnaires from the civil war between Octavian and Marc Antony. Paul addresses the issue of the Philippian church’s need for unity as they stand together under the assaults of those who live according to a different empire, a different king, and a different culture.

So, what about Paul’s letter to the Ephesians?

While there is the use of the language of power and the spiritual realm in Ephesians, that would resonate with the description of Paul’s time in Ephesus from Acts 19, I believe it is Paul’s own context that most influences the content of his letter to the Ephesians.

Ephesians, as a letter, is heavy in Jew and Gentile references, explicit and implicit (the distinctions between the ‘we’ and ‘you’ descriptions throughout the letter); Paul’s ministry and sufferings (Eph.3:1-13, 4:1) are for them and are their glory. But the clincher, in my opinion, is Paul’s pivotal description of the Temple and how Jew and Gentile are equally given peace with God through the death of Christ. Paul mentions the dividing wall Eph.2:14, the ‘soreg’ (identified by the arrows figure 1), that surrounded the temple and was the demarcation between the Jewish Jews and Gentile areas in the temple. On the outside of the wall, was the court of the Gentiles, on the inside was where Israelites were free to enter. This wall is described as a ‘dividing wall of hostility’ in Eph.2:14, probably because of the sign that was placed at each of the entrances in the wall (see figure 2). In red paint the message to Gentiles was clear,

No stranger is to enter within the balustrade round the temple and enclosure.

Whoever is caught will be responsible to himself for his death, which will ensue.

So how does Paul’s context of being “in chains” influence this language in Ephesians?

When the seven days were nearly over, some Jews from the province of Asia saw Paul at the temple. They stirred up the whole crowd and seized him, shouting, ‘Fellow Israelites, help us! This is the man who teaches everyone everywhere against our people and our law and this place. And besides, he has brought Greeks into the temple and defiled this holy place.’ (They had previously seen Trophimus the Ephesian in the city with Paul and assumed that Paul had brought him into the temple.)

The reason why Paul was under house arrest, was that he was falsely accused of bringing a Gentile (Trophimus the Ephesian) through the ‘soreg’ into the ‘Jew-only’ section of the Temple complex. While Paul, was completely innocent of doing anything of the sort in the earthly Temple in Jerusalem, he has no problem in the letter to the Ephesians of confessing his complicity with God in Christ of ushering the Gentiles into the Heavenly reality – in fact he boasts about it. Paul is not concerned with storming the ‘soreg’ of the earthy temple because God in the body of Christ has broken the ‘dividing wall of hostility’ and not only made one new man out of the two but is making a temple, ‘a dwelling in which God lives by his Spirit’[2].

Approaching the preaching of Ephesians through this lens not only ‘earths’ Paul’s argument in his historical present, it also creates a dynamic that allows a narrative to be seen within the text itself.

[1] This is probably the letter to the Loadiceans that Paul encourages the Colossians to read in Acts 4:16,  “After this letter has been read to you, see that it is also read in the church of the Loadiceans and that you in turn read the letter from Laodicea.” Both were delivered by Tychicus Col. 4:7 and Eph.6:21